Nepalese e-passport, will this transformation shift the ranking of Nepalese passport?

In Nepal, a 102-year-old academic and cultural expert became the first to receive the chip-based identification document on Wednesday. The first e-passport personalization centre was inaugurated at Tripureshwor, Kathmandu.

What makes the Nepalese e-passport distinct?

In the machine-readable zone of the page with the picture of MRAP, you can see a symbol for optical character recognition. A passport reader machine allows you to see essential details on your passport as it reads it. As well as these, electronic chips and antennae are also part of the electronic passport.

Fingerprints and pictures are stored on the chip. Once the chip is locked with these details, no changes or additions are made. This is Nepal’s first electronic passport. It is made of polycarbonate. Invisible to the naked eye, data cables include polycarbonate cables that contain electrical chips and antennas.

There are two types of ordinary passports: ones that have 34 pages and ones that have 66 pages. Electronic passports can be divided into seven categories: diplomatic, extraordinary, temporary, ordinary, and Siemens.

Read Also: Australian Passport ranked the 7th Most Powerful Passport in the World

In 2010, Nepal switched from handwritten to machine-readable passports, and now, 11 years later, Nepal is going to issue the second generation of e-passports. National officials say this gives Nepal a competitive advantage over its competitors.

What is the strength of the Nepalese passport after issuing it as an e-passport?

Nepal is ranked 110th in the recent Henley Passport Index and Palestine as the world’s weakest passport. Many Nepalese who travelled abroad should not be surprised by this ranking. However, it is still of concern, considering Nepal is no longer a conflict nation. Today it has been involved in no large-scale criminal or terrorist incidents and has a stable political system.

However, Nepal’s poor economic status, weak immigration system, conflict, and Nepalese overstaying their visas abroad have ranked Nepal lower than other countries. The new passport will be among the best, most reliable, secure, and hassle-free for travellers in technical specifications. You can also avoid repeated testing by touching the electronic passport machine.

Likewise, in international airports with electronic doors, Nepali citizens will be able to move through those doors with ease by looking at the face sensor of the carrier when the door opens for traffic.

In terms of security, design, and other features, Nepal’s passport will be one of the best in Asia, according to Dornath Aryal, director-general of the Department of Passports.

From where you can collect your new Nepalese e-passport?

A new shade of biometric passport will be available from the department. Passport covers will change from green to chocolate brown.

As Arjun Kant Mainali, former joint secretary at the Ministry of Foreign Affairs, said, Nepali passports will rank higher once they are updated to the global standard. In addition to preventing misuse and theft of diplomatic passports, the new passport is expected to improve security.

Though Foreign affairs have remained adamant towards the passport strength and upliftment in the global ranking the reality awaits. So, till then if you have any related queries associated with the e-passport drop us your questions in the comment section below. 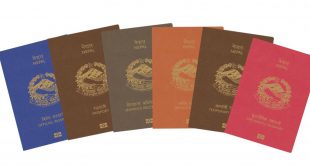 Everything you need to know about the Nepali e-passport