As a consequence of recent migration changes by the Australian government now, we can see two distinct scenarios in recent days.

A huge number of international students graduated in big cities now moving or planning to move into regional areas. Many of them opting Tasmania and Darwin as the first option so those cities getting overcrowded and those moved recently not getting rooms to live, forgot about jobs.

Many students pursuing further higher study in national hubs and enhancing academic as well as industry skills. Besides that trying hard to get points from every possible option, such as pushing hard to get 8 each band in English test, pass NAATI CCL and working on nominated occupation jobs.

If we take recent Department of Home Affairs figure as a reference; one can draw a situation where a person would not find a chance to lodge Australian permanent residency, who cannot score 85 points on SkillSelect. But, the actual scenario may not be like that. This scenario may be one of the major pushing factors for international students to move into regional. By drawing this conclusion many education agents enrolling students in regional to meet nomination criteria and getting a hefty commission from colleges. If you go with recent data and figure out the situation, one needs to score 85 points on skill select at least to be hopeful for an invitation to apply for 189-visa. The subclass 189-visa is a skill independent visa that allows remaining in Australia permanently and become an Australian citizen. Generally, we know it as an Australian Permanent Residency.

But, here don’t forgot recent DoHA figures have only 100 invitations outcome. If a number of outcomes increase the cut off points will go negative in numbers. Means if SkillSelect invites more than 2500 EOIs to apply for visa point score will go down to 70-75. This scenario may be a relief for many.

What after new point score?

Many students moving into regional fearing the change in migration points award changes. Once the changes come into effect singles will get 10 points and married with spouse holding no skill assessment & poor English will lose points. This scenario also is manageable. English could be improved and there are different ways one can get points in their SkillSelect EOI. 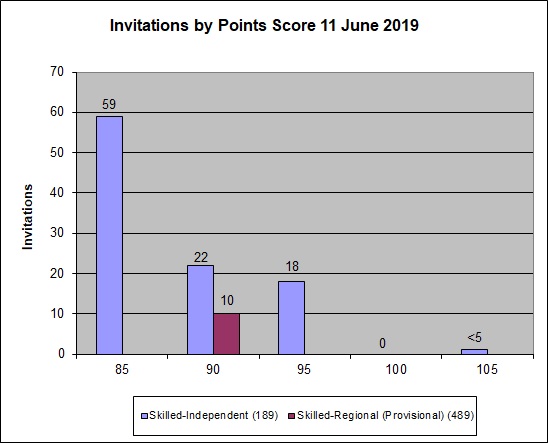 Can I get more points?

There are different rooms from where one could add points into their EOI. Getting a score of 8 each band, passing NAATI CCL, working in the nominated field and so on. There might be another option of changing nominated occupation for those who have different study background and experience. This room may be a breakthrough point for many because there are various and hundreds of occupations through which you can get Australian permanent residency.

If you go through the recent invitation figure, some people have managed 105 points to get invitations to apply for subclass 189. As per the data released not more than 5 people got their invitation to apply for 189-visa on the last round of the migration program year in June 2019.

There may be possibilities ahead with challenges, so it would be in favor of you if you research and get help from expert or mentor before moving interstate and make any move.