Recently, Australian Home Affairs Department has canceled more than three thousands student visas while student onshore and more than 13 thousands of those who were offshore. As per the figures on media reports, the Australian government blocked more than 13,398 students entering Australia when they offshore. Those who got their visa canceled while offshore would be blocked to board a flight to Australia and don’t get a chance for review appeal. 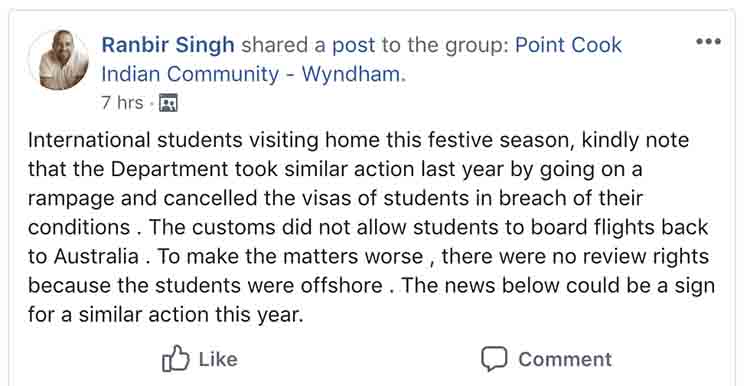 ”International students visiting home this festive season, kindly note that the Department took similar action last year by going on a rampage and cancelled the visas of students in breach of their conditions. The customs did not allow students to board flights back to Australia. To make the matters worse, there were no review rights because the students were offshore. The news below could be a sign for a similar action this year.” a member of Indian community Ranbir Singh signaled community people with sharing 9News report on Facebook.

Read Also: This should consider while choosing courses in Australia

3 Nepalese students were deported for failing to maintain Australian student visa conditions. A Nepalese community page on Facebook named ‘Perth Nepal’ reads, ‘recently 3 people were deported from the Australian Immigrants while coming back to Australia from Nepal after the holiday with the allegations working more than work rights.’ The page also requests community members to maintain their visa conditions.